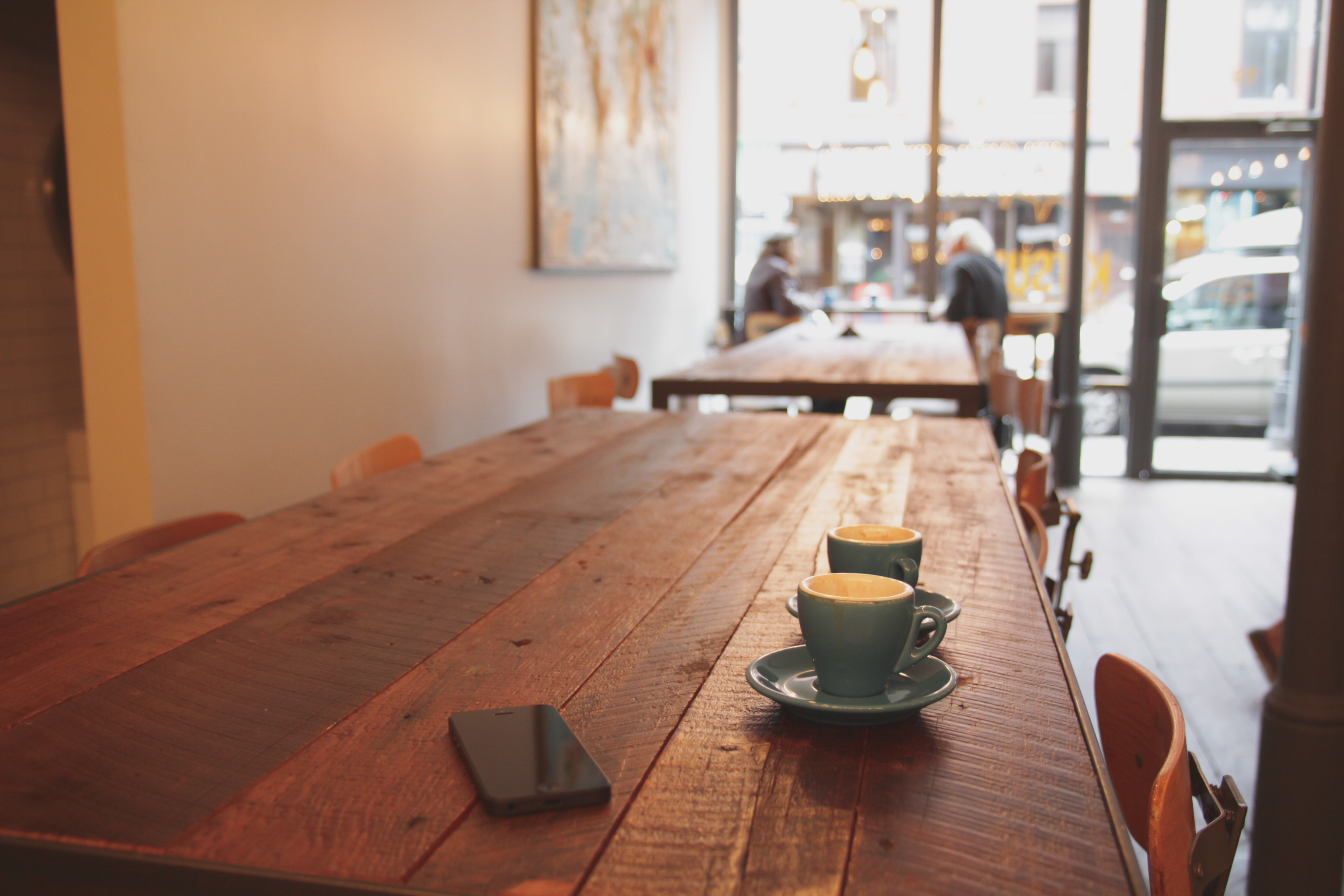 Ever since the cafe culture epoch of recent years, Dublin’s cafes, by their number and standard, have been doing a whole lot more than serving coffee and cake to the city.

They’ve become some of the best creative arteries in Dublin. The spark of caffeine ignites all those plans and big ideas that are discussed between friends or colleagues and shared dreams become future creative collaborations. And it all seems possible when you see how far the founders of some of the best cafes in Dublin have come. As I’ve said before on this blog; Dublin needs its creative inspirations and the stories behind the cafes below are inspirational.

The Fumbally is a great space to create; with free wifi, big tables with lots of space and those big windows through which to observe the hip world of D8 troop by. The mishmash of furniture and books provide a characterful ambience and makes The Fumbally an ideal space to hang out a while and create and maybe even strike up a conversation with a fellow creative. Luca D’Alfonso, one half of the duo behind The Fumbally, believes cafes are important to a city’s creative scene because ‘creatives don’t have an office, so they come to cafes…you have big tables so you talk to people you wouldn’t dream of normally’ he said, adding ‘when you have food and drink, you relax’. And of course the best ideas spring from a mind that is relaxed and not encumbered by the normal day to day concerns. And with coffee and food as good as it is here there’s no way you can be thinking of anything other then the flavours exploding in your mouth.

From falafel to festivals to the world then back to Dublin 8: The Fumbally’s story is an interesting one. Luca and Aisling Rogerson entered the food scene in Dublin with just a falafel place, then they did the festival circuit to make some money with which they used to travel the world for inspiration. The Fumbally is the product of that inspiration, set up to bring the street food they were inspired to create after trips to street food capitals like Brooklyn, Berlin and Istanbul, to Dublin. I wondered what was so special (other than the taste of course!) about street food and after a pause to consider the answer, Luca said ‘street food connects you to the place’. So you can see why The Fumbally is not just a place in Dublin 8 that sells coffee; it is a bite of Berlin, a morsel of Istanbul and a chunk of Brooklyn.

Brother Hubbard’s contribution to creativity in Dublin lies in its culture of collaboration. Co-owner, Garrett Fitzgerald, said “We have a weekly meeting and all the kitchen staff are invited to give their ideas’. There’s been collaborations with the wider community too. Young chefs have taken over Brother Hubbard’s kitchen to run pop-up restaurants; customers have curated playlists and when the question arose over whether or not the outdoor space should be a smoking area the cafe allowed customers to vote on its blog. And the cafe will have its first art installation at the end of August. There is also a charitable aspect to the cafe which shows that this is a business that really cares about the community in which it lives. The proceeds of Brother Hubbard’s scon-a-thon events have gone to causes like The Irish Cancer Society and An Cosan. The way Brother Hubbard encourages collaboration is seen in the lack of solitary heads bent to laptops as they do not offer free wifi, Garrett explained why: “We didn’t want people to be in here, heads down, working and not chatting’. They’ve also taken great care with the interior design of the cafe, working closely and collaboratively with designgoat ‘we were very involved in the design process’, actually they work closely and collaboratively with all their suppliers, to ensure their vision and the high quality standard in everything they do, is met.

The mixing of ideas is at the heart of Brother Hubbard’s eclectic menu which has a middle eastern influence, because ‘middle eastern food is tasty, colorful and made for sharing’ Garrett said. But you can get a mean dish of eggs for brunch (with a Turkish twist) and choose from an array of pastries if you just want something bold to go with your coffee..and Brother Hubbard’s is…very very good. And it ought to be considering Garrett and the cafe’s other co-owner, James Boland learned about coffee from some of the best purveyors of coffee during their time shadowing founder managers of cafes in Melbourne, Australia. After the coffee was sorted Garrett spent a few years traveling to places like the Middle East and Istanbul for inspiration for the menu for the cafe that, at that time, only existed in his and James’s dreams. It is lovely to see people with as much drive and commitment to their vision of foody and collaborative loveliness, turn their dreams into reality. And you couldn’t get any more real than Brother Hubbard.

Kaph is the manifestation of an idea Chris Keegan had for years and after his property company failed in the recession his next business, which was to be a cafe: ‘had to work. It was a case of the universe conspired to make me take the plunge’ Chris admitted. His idea for Kaph was that it would be the life source of the block; that it would be a more casual, less corporate, user friendly kind of place. Authentic and not overpriced. And open to anyone. Only a little over a year ago a premises came onto the market that was the perfect location for this type of cafe: ‘I put a letter to the landlord under the door and 3 weeks later we were open‘. The door in question once belonged to the boutique Smock. You would think the fact that the origins of Kaph’s interior was in fashion would have delayed the cafe’s opening due to necessary renovations but it didn’t. The decision not to replace anything enabled a speedy opening but more importantly it has actually enhanced the cafe’s character: The old, veinous wooden floor was untouched; the box for storing hats is now a bench; the shelves upon which bags of coffee and grinders now sit used to hold jewelry and even the clothes hook high above the coffee bar remains. For the things that did need to be added; these were either sourced or made locally, like the aged copper wrap bar, which is made of up-cycled wood and a craftsman from Meath made the wooden counters we sat at. The final touch to Kaph’s character is the music, which permeates the tall, airy space adding an extra dash of pep to the ambience already buzzing with local chat and the pleasant Saturday afternoon cafe-bustle, in fact ‘people sometimes don’t even bother with their ipod they like the music so much’ Chris said.

Chris has always been fascinated by the connection between people and place and it’s something he obviously understands well: ‘its a symbiotic relationship between the place, and the people who come here, including the artists and creatives who come for the atmosphere’ he said, adding ‘the owner [of a cafe] can’t dictate how it should be or what should happen’. Like any great creative project; part of the greatness is in the organic nature of its development – there needs to be a flow to it – and the ability of one project to form fruitful collaborations with another. Last year’s pop-up gallery upstairs in Kaph, a collaboration with Making Space, was a perfect example of this. Artists like Chris Judge, Fatti Burke, Fuchsia MacAree and Steve McCarthy exhibited their artworks; in fact Chris Judge sold all his pieces in 20 minutes. I suspect, considering Chris Keeghan’s multifarious mind, many more great ideas and creative collaborations that support the community in Dublin are in the pipeline. And I’m very excited to watch what happens next in the creatively stimulating space, that is Kaph cafe.

Clement Pekoe’s evolution has well and truly been in tandem with the evolution of a part of Dublin that is now known as The Creative Quarter. South William street is one of the places to be if you own a creative company, ‘South William Street was just a side street on the way to somewhere else but it has exploded with creative companies, who are now our neighbours and friends’ said Dairine Keogh, one half of the founding duo of the cafe. Like all the cafe owners in this article Dairine believes that the recession actually improved the city ‘it was tough around 2008 when we were looking to set up first, but when everything happened in the city rents loosened up and it benefited us’. There’s a strong sense of wanting to retain what the city found in the downturn and this is mirrored in how Clement Pekoe is run.

This cafe’s special something is speciality tea and coffee ‘it’s our core product’ Dairine said, adding ‘we’ve said no to things that would dilute what we do’. Inside the cafe there’s an air of intimacy permeating the space; a niceness and a warmth to it. No surprise there’s a steady flow of regulars whose preferences are known to staff ‘at this stage we know how they take their coffee….it’s really lovely helping them choose and understand the product’. In the same way they’ve gotten to know their neighbours and close relationships have formed and collaborations have sprung from these. Take the upcoming pop-up tasting event planned for 30th & 31st August in association with The Corkscrew, ‘this is happening because of our friendship with them‘. You get the sense that Clement Pekoe very much values close relationships; this is evident in the owner’s decision for now at least to remain small and independent ‘we’ve no plans to become a chain’. All of this speaks volumes to their integrity and the heart they invest in the serving of tea, coffee and cake to the creative quarter. The only negative thing about all this is that I do not work on South William Street, so, sadly, my daily coffee before work must come from another, less meaningful, all together less inspirational, source.

Creating something that has that bit of magic which draws people in and is profitable is not an easy thing to do. The success of Brother Hubbard (which has spawned Sister Sadie), Kaph, The Fumbally and Clement Pekoe can be attributed to the entrepreneurial instincts and business acumen of their founders as well as that gem of an idea, that is the bit of magic, they had to create a great cafe.

And the magic of a great cafe is never just in the coffee you get there. Coffee is the binding ingredient for the whole magical mix that constitutes a great cafe: The connection between place and people; the atmosphere, organically grown and aided only by another magical source like music or art, or even film. And of course …….. fabulous food; be it of the street, middle eastern or the cake variety.